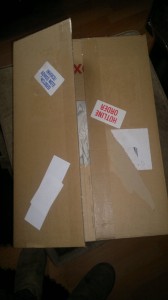 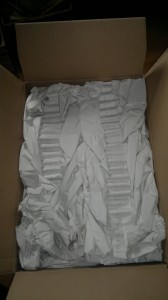 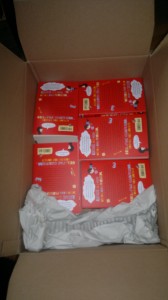 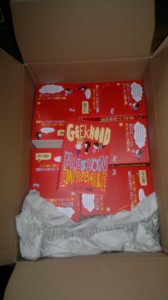 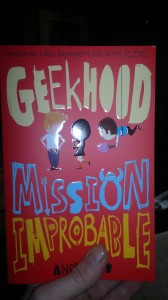 I tell you what; I’m still recovering from the Waterstones Children’s Book Prize do the other night. Don’t misinterpret that – I don’t drink. It was just such a whirl and, to be honest, I don’t get out much.

Let’s do a rewind. When I got the news that I’d made the shortlist, I was astonished. My mad little book had somehow found its way onto some prestigious shortlist and there was going to be a ceremony and everything! I know now that it was largely thanks to those lovely Waterstones booksellers who championed it and those legions of generous bloggers who made such a noise about it – and I can’t thank you enough.

So, after my original chuffedness, I started to give it some serious though and decided well in advance that there was no way it was going to win; as I said on the night to more than a few people, I felt like the clown car at the Grand Prix.

But, as the night came round, and as I was deciding what to wear (the usual tramp chic, capped off with my only smart jacket), there was that nagging little voice that told me I had as much chance as anyone. And, much as I tried not to listen to it, it was still there – right up until the last second.

I got to Waterstones Picadilly early, in the mistaken belief that the do started at 6pm. With 45 minutes to kill, I wandered around the store, popping drops of Rescue Remedy to muffle the flap of butterflies in the tum. Around 6.15, I was too nervous not to go up to  the 5th floor, so I did – like that thing first step you take into a dentist’s surgery after hanging around the waiting room for too long.

The 5th floor was amazing. Big boards declaring the event, a flashy bar lit like one of those ones you see in nightclubs in American movies, TV screens bearing the Book Prize logo. The clown car really had arrived, honking and screeching at the Grand Prix.

Nerves got the better of me and I decided it was time for a wee. Anyone who’s read my book will know what PPS is – and I had a dose; there was a guy at the urinal, so I opted for the cubicle and, after fiddling with the lock, got myself drained. And then couldn’t open the lock. And then somebody wanted to get in the cubicle and we were both rattling the door and I muttered ‘sorry’ as it opened and felt like a complete twonk. I don’t think the Mighty Philip Reeve would’ve had this problem.

Back on the 5th floor, things were starting to rev up; people were arriving and hands were being shaken. After being signed in by the lovely meet and greeters, I managed to collar Darran from Northallerton Waterstones and have a chat with him; lovely chap – and I’m hoping to get to his store in the summer. My agent, Jenny turned up, Jane and the Stripes Gang appeared and we sort of grabbed a corner of the room and huddled. There were lots of faces appearing; some I knew and most, I didn’t. One face that was particularly welcome belonged to Paul Black of ex-Stripes fame. Hadn’t seen him for ages and it was so lovely to have someone with his tongue firmly in his cheek in the room.

And then it started. There was a little speech from Melissa, the organiser, followed by one from theWaterstones Head Honcho. And then there was a little film played on the monitors of all the books on the shortlist. And every time someone said ‘Geekhood’ or I saw it’s Geeky yellow cover on a board or monitor, my treacherous little heart did a little leap. Honestly, it was so surreal – me at the Book Prize do, surrounded by people of calibre and worth.

And then it got tense. They started with the Picture Book prize and my heart started racing then; I guess because it was the beginning. And that little voice in my head started doing the ‘you’ve got as much chance as anyone’ chant. By the time we got to the Teen category, I was a wreck and actually pressed my head against my agent’s shoulder, eyes tight shut. So butch.

I don’t know how they do it on the X-Factor when those judges do the read-out of who’s staying and who’s going and it takes about half an hour of silence before you hear what’s what. I think if I was a contestant, they’d be carrying off a corpse; there were milliseconds between the ‘and the winner is…’ and ‘Annabel Pitcher…’ but they felt like an eternity.

Once it was announced that Annabel had won, I was suddenly relieved. I was a bit trembly and think I might’ve apologised to my publishers for not winning, but there was no sense of disappointment; just relief that the tense stuff was over.

That sense of not being disappointed was borne out when I met the lady herself, who even let me touch the award, tart that I am. She was so lovely and appeared as confused and bewildered about everything that I was. I haven’t read her book, yet, but I’m going to. If it’s anything as generous and lovely as she was, then it’s no wonder she won.

There were a few more rounds of carousel-style handshakes and people saying lovely things to me about Geekhood and then I was on Oxford Street, looking for my car. But, genuinely, without any sense of ‘it should have been me’ or loss. Before I left, one lady from Waterstones said “And have you had a little present from us?” and my dunderheaded, naive, but honest reply was “Well, you got me here; surely that’s present enough?” But it wasn’t; I got a bottle of fizz pressed into my hands – which I’ll give to my Mum when I next see her.

Despite my inability to control my nerves, it was a brilliant event and something that I’m really glad that I got the chance to experience. In writing Geekhood, I wasn’t setting out to try and win awards – in my dopey ignorance, I wasn’t even aware of most of them. But I had a blast and got to meet some really lovely people, whose passion for books was inspiring.

I’m glad Annabel won; she looks like one of those flok who deserves to – a good egg. And, who knows, maybe the clown car’ll get dusted down for another occasion?

OK, you crazy kids. It finally looks llike the launch do for Geekhood: Mission Improbable is to become a reality – thanks to Michael and the events team at Waterstones on High Street Kensington.

The date will be April the 8th, you know where and I’ll confirm the time once it’s decided.

Anyone who came to the last launch will know just how loopy it was. There was Darth Vader swanning about, a couple of Stormtroopers reading inappropriate books and even some miniature-painting and RPGing going on.

And then there was you guys, who rose to the challenge of coming dressed as a Geek, with all the grace and aplomb of a bunch of genuine social misfits.

How the merry Hell do we top that???

Well, I have a plan. But once again, it needs you guys to throw social convention to the wind and join me for an evening of silliness and Geeky joy. Here we go:

No Dark Lord, no Troopers. Instead, I’m hoping to get the God of Mischief, Loki, turning up, the Caped Crusaderess, Batgirl, your friendly neighbourhood Spiderman and a couple of other surprises, to boot.

Yup – the theme is superheroes… and this is where you come in:

Of course it’s entirely optional, but I’m throwing down a garishly-coloured gauntlet. If you are up for it, I would love it if you came as the superhero of your choice. You can go DC, Marvel, Titan – whatever – or you can create your own superhero!!! I’m going to do my dangdest to sort out some prizes for the best-dressed superpowered vigilantes and you’ll be in good company, as there are some hardcore cosplayers on the list.

I’ve been to a couple of author events and decided that I want to put the fun back into these events. Aside from a couple of short speeches, there’ll be no waffle, no reading from books or any of that; just us lot, all together, creating out own Garden of Geekdom for a short time.

Let’s make it more fun, more colourful and more Geeky than the last one: