Wow! I reached 500 followers on Twitter – and I’d like to say thanks to each and every one of you for putting up with my often-banal, sometimes funny and generally confusing blather.

To mark this Tremendous Occasion,  I wanna do a competition. Never done one before, so it’s going to be a bit basic, but here we go…

One of my vain boasts is that I used to draw a static cartoon for the BBC, called Showbiz Sean. I only say that to let you know I’m ok with a pen and pencil. I did also have a picture printed in Whoopee Comic, but that doesn’t really count.

Anyhoo, for one Lucky Winner, I will sign a copy of my book, PLUS I’ll do a one-off, watercolour cartoon of what I think Archie looks like – all on proper watercolour paper and everything.

Here’s what to do: simply Tweet to the world that you’re entering The Geekhood Competition – that way, I know who’s playing.  All names will be put into a Randomiser (organised by Stripes) and, in ten days time, it’ll be announced who won. You can do more than one Tweet, which does increase your chances of winning.

It’s simple, because I’m a dunce. There will be a more complicated one as Geekhood 2 gears-up – but that’s for another time… 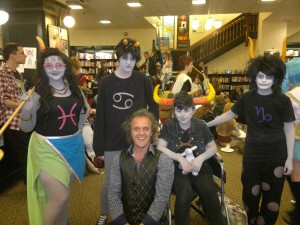 Last night, I went to ReCon, held in Southhampton’s Waterstones Above Bar. OK, I’ve been to a couple of conventions in my time (a Dr Who one in Longleat in the ’80s and once, when my mate, Miserable Jim was working as a TV presenter, he blagged me in, as his soundman, to a Star Trek convention – and we met Willian Shatner!). But I’d never done a convention in a shop and I didn’t really know what to expect.

When I got there, there was a queue forming out the front of the store, with a few tell-tale tridents giving me a bit more of a clue. The guys showed me in and downstairs, where I med Robin The Geeklord, who seemed to be masterminding the whole thing. After hallos with the other authors and a comic-book artist, I parked myself and waited for the doors to open.

Which they did. Bringing with them a river of Cosplay outfits and home-made props, the like of which I’ve never seen before. Like a rainbow. With horns. And guns.Have a butcher’s at these: 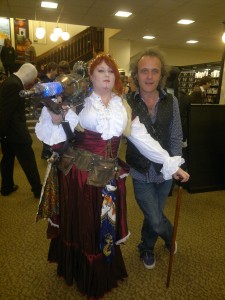 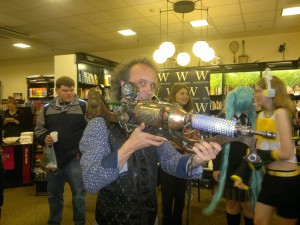 Me with Big Gun 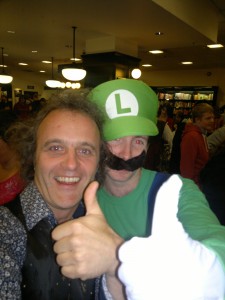 And Luigi! Why not? 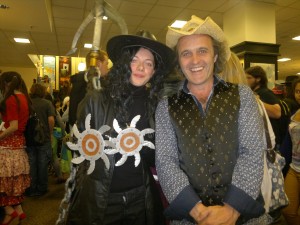 We did a Q&A with the assembly, who looked like this, from my point of view. 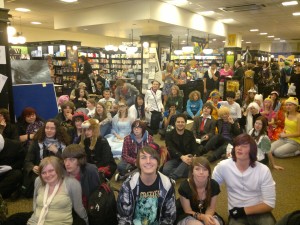 I had to have three goes at taking this picture: the first time, I had the camera the wrong way round and took a photo of my forehead, the second time – just as I was about to click the button, my Mum rang (cue jeering) – third time, lucky.

Q&A was great, even if my knowledge of Anime only went as far as Scooby Doo. Then there was more signing and chatting to the crowd, before the Cosplay Competition – which we got to judge! But that was hard; there were so many cool costumes that had obviously involved a heck of a lot of effort – but we nailed it down to  three. 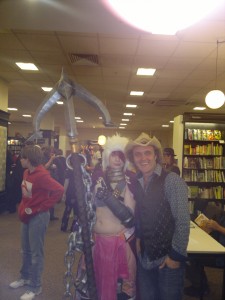 There was a quiz (which I couldn’t answer in any shape or form) and a raffle with prizes that were cool enough to make me wish I’d at least worn a beard.

But the overwhelming thing that struck me wasn’t the stunning costumes or the mind-bending props; it was the sense of celebration about the whole thing. Honestly, as soon as those guys came down the stairs, the mood lifted and just kept on rising. I’m always banging on that Geeks are people who find beauty where others don’t and I think ReCon went some way to proving my theory; everyone was ridiculously happy to be there and revelling in an environment where they could step out of Real Life and create something infinitely more colourful. 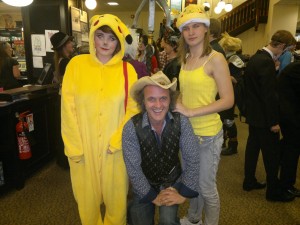 I had a blast; a big, fat, Geeky, Cosplay blast and even though I had to drive back home up the M3 and through the rain, the sheer joy of the whole thing helped the journey pass much quicker than coming down.

Thanks to Robin and his dedicated gang for inviting me, thanks to the other authors for putting up with my excitable behaviour and thanks to the 170-odd people who came and let me into their worlds for an evening. There’s another of these extravaganzas next year. I hope to be going back. If you’re in the area, I seriously suggest you go. SERIOUSLY.