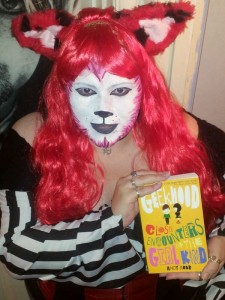 What started out as a silly bit of banter between me, Jim from YA Yeah Yeah and Holly Smale is slowly gathering ground…

No – hang on; keep reading.

Just imagine being able to turn up at a festival and trade cards with your fellow authors or your audience. Imagine being able to play the game! Would Mallorie Blackman trump Philip Reeve? Could I take on the mighty Sarwat Chadda? And who’s got the rare, shiny JK Rowling card? And what about YOUR card – how cool would that be? 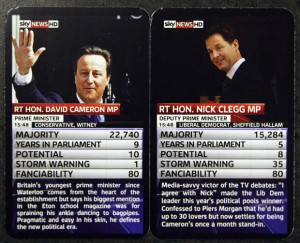 I haven’t got the foggiest how to get this going, but it might be a good idea to start with you lot. So, in the first faltering steps of something a bit bonkers, I’m asking you guys to send me what you think the categories should be.

What about hidden talents?

I don’t know how far we’ll get with this – but it might be fun to start, anyway.

Drop me a line with your suggestions for Author Top Trumps. Hell – Tweet them with the hastag #AuthorTopTrumps – maybe some crazy person with pots of cash is looking for an elitist product with no commercial value, whatsoever. At a later stage, we might get round to fielding ideas for Blogger Pokemon…

When I threw myself into the world of RPGs, in the mid-80’s, there were plenty of geek games. Dungeons and Dragons had crashed onto the scene and divided parents across the country: you were either for it or against it. Part of the problem was that various religious groups saw D&D as the first step towards Satanism – a bit like some of the hoo-ha that surrounded the Harry Potter books. Really, this was because D&D wasn’t fully understood.

However, D&D gave rise to a whole load of other games for geeks; some that didn’t involve witchcraft, as they weren’t set in fantasy environments – and the RPG scene exploded; some even kicked-off some icons that are popular today. Many of the games I used to play seem to have disappeared, so I want to have a look at my Top 5 Games for Geeks:

1)    Paranioa. I really like this one, because it was loaded with humour. Where other geek games relied on serious interaction and character development, Paranoia had a ‘divide and conquer’ attitude, giving each player his own secret agenda; everyone was out to stab everyone else in the back. 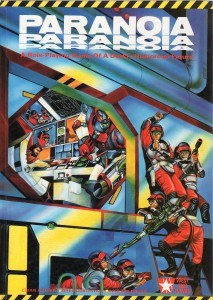 It was set in the dystopian future of Alpha Complex; a huge, domed city run by The Computer. Think 1984, Hal from 2001 and Logan’s Run and you’re pretty much there. The other difference from other geek games was that you got ‘lives’ – a bit like a computer game; if your character died (which they often did – and in the most ridiculous circumstances), you had a few more clones of that character up your sleeve. If you like the lighter side of RPGing, then check Paranoia out; it has returned and is now published by Mongoose Publishing.

2)    Judge Dredd. This one, too, was loaded with humour – but a bit more tombstone-faced. Inspired by the leading character from the comic, 2000 AD, Judge Dredd RPG gave you a taste of what it was like to be a lawman in Mega City One. 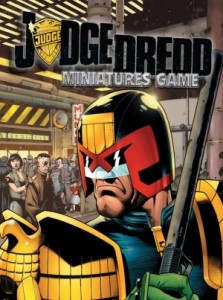 More than the game itself, I liked the background fluff on the major characters. I’d been a 2000AD fan since it was Starlord and reading up on baddies, such as the Dark Judges, Chopper and the Angel Gang was really cool. Plus there was some extra stuff on the Judges and their equipment – the mighty Lawmaster and the dreaded Lawgiver. Again, this has resurfaced and is in the hands of Mongoose Publishing.

3)    Teenage Mutant Ninja Turtles and Other Strangeness. You read that right. Long before the cartoon, films, action figures and ‘cowabunga’, there was TMNT&OS. It came off the back of the original comic strip, by Eastman and Laird and was pretty different to the family-friendly fluff we know today.

TMNT&OS was set in a post-apocalyptic world, in which characters could be any form of mutated animal – not just a turtle. Although the accent was on fun, this was one of the distinctly grittier geek games and was one of the first in which players rolled for a mental illness and could choose their sexual orientation – which was pretty forward-thinking at the time. 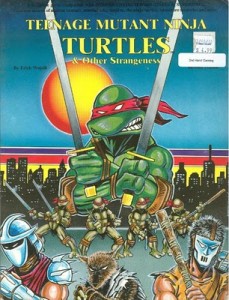 As soon as the half-shelled heroes hit the big screens, changes were made to their world and the characters; it was dumbed-down, which killed it off. Copies of the original rules sell on eBay for Big Bucks. My Mum sold mine at a car-boot sale.

4)    Call of Cthulhu was one of the ultimate games for geeks – which is partly why I referenced it in Geekhood: Mission Improbable. If you’ve ever read any HP Lovecraft, then you’ll know the world the game’s set in. If you don’t – strap yourself in!

Cthulhu is set in Edwardian England (or wherever you happen to fancy locating it) and is based around horror. But it’s not  just your bog-standard ‘here comes a werewolf’ scenario; Lovecraft’s monsters are Out There. They’re Proper Bonkers and Off The Hook, etc. Think lots of tentacles and weirdness.

The great thing about Cthulhu was that you had to try and keep you character sane: the longer you hung onto your Sanity Points, the better your character got a grip on his own skills. But lose a few and you started to look at your fellow players with a hungry glint in your eyes…

5)    Middle Earth Role Play. OK, there had to be one fantasy game in here; you can’t really have list of geek games without some swords and pointy hats thrown in. 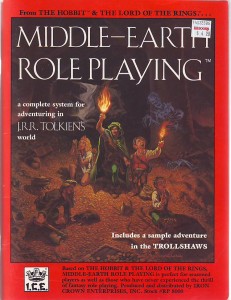 MERP was, as you might guess, set in the world of Orcs and Hobbits. While I loved the artwork and the background fluff on Middle Earth and all its races, I did find this one a bit harder to play; the rules system was way more complicated than D&D but, if you were a seasoned RPGer, I think you would have welcomed the attention to detail.

MERP was pretty popular in the 80’s but the one niggle amongst us Tolkien-heads was that the use of magic was a bit overt. Tolkien saw magic in Middle Earth as an extension of the forces of nature and something that took time and effort to use. When we played MERP, we’d fling thunderbolts around like they were going out of fashion.

So there you have it – my five forgotten games for geeks. Most of them are available in some form or other, but you can always check out eBay for the early editions. My brain’s a bit cobwebbed these days – which ones have i forgotten?