You might know that I have worked as an actor for over 20 years. You probably know from my books that I’m a massive Star Wars fan. Being in Star Wars – surely that’s a Geek’s dream? The Holy Grail? Mecca? All of those things and more?

YOU could be in the next Star Wars movie. Yes, you.

Years ago, there was a TV show, hosted by Chris Evans, called TFI Friday. A little while before Lucas was making The Phantom Menace, Samuel L Jackson was a guest and he and Evans started talking about the new Star Wars. Jackson did a lovely piece to camera, begging Lucas to cast him as anything. If memory serves, he said he’d be happy with playing an alien street-sweeper – just to be in the film would be enough. 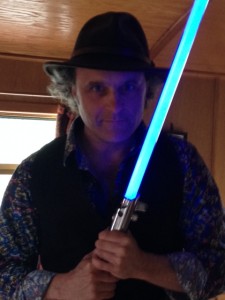 There’s an opportunity, folks. We could all be street-sweepers, together.

There are a few criteria, but cut and paste this link: http://www.projectcasting.com/united-kingdom/star-wars-epsiode-7-casting-call/ and you’ll get all the relevant information. Let me know how you get on.

And may the Force be with you. Always