I like a literary festival, me – and I’ve been lucky enough to get a few under me belt.

It’s hard to define exactly what it is I like about them all, because they’re all so different. Hay Festival is quite grown-up and organised, while Edinburgh is a bit more bohemian and have-a-go. Bestival was mayhem – but in a positive and free-spirited way, while Bath was more cosmopolitan and cool. But, they were all brilliant. 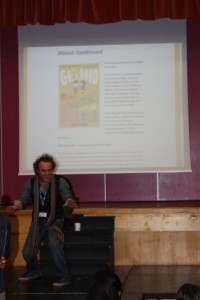 I think what unites them, tents, yurts and books aside, is the gang mentality; lots of people all working together to make things happen. Being part of a gang – even if it’s just for the day – is very life-affirming. Plus, there are all the people you get to meet, even in passing: the unsung heroes backstage, the heroes front-of-stage who are so sung they’ve practically got their own theme tunes and all the people in between.

But what I also like about literary festivals is that, like music festivals, they’ve got their own mythology. Like, if you go to Knebworth (as I did to go and see Oasis), you can’t help but be swept up by the history, myths and stories that surround the event: “This is where Led Zeppelin did such-and-such…” “This is where the Stones did so-and-so” “This is where Freddie Mercury said…”

All these stories seem to have been soaked up by the land itself, giving each festival its own feel.

I think the same’s true of literary festivals. “This is where Anthony McGowan…” “This is where JK Rowling…” “This is where Malorie Blackman…” All these little events and stories go on to create the myths, legends and verbal tapestries that surround each literary love-in and help to make it the event that it is.

This is, in part, why I’m so pleased to be appearing at the Brentwood Literary Festival. Apart from being an independent festival, put together by the heroic Chicken and Frog bookshop, it doesn’t yet have its own mythology. 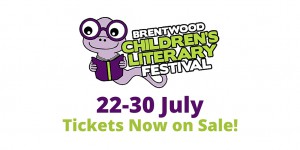 But I’m lucky enough to be one of the first to start the threads of wherever this tapestry takes itself. Not by being outrageous or stupid, but by doing what we do and seeing where it goes. All the authors involved; we’re starting a story that, fingers-crossed, will be built on and embellished and altered until the Brentwood Literary Festival has its own feel, its own identity and its own tales to tell.

But, more importantly, you get to say:

“I was there, when this story started.”