Anyone who’s read my books will know that I love my RPGs and I have more than a soft-spot for war-gaming. I love the release from the Real World and, perhaps more, the fabulous interaction that can only take place between people when they’re committing to game-play.

I was born a little too late to get into the card games that followed – the Pokemons, Yu-Gi-Ohs and the Magics of this world – although I did manage to get myself together for the Talisman game that was released in the ‘80’s.

However, since having a son, Hugh, I’ve now been reintroduced to card-based fantasy games and, being an old gamer, have thrown myself in the deep-end. I think the first one we really got to grips with was Munchkin, which was swiftly followed by things like the Warhammer games and the inevitable Top Trumps. With card games being such a staple of our time together, I was more than delighted to play-test Oddball Aeronauts with Hugh and his chum, Max – both of whom are 10 years old. 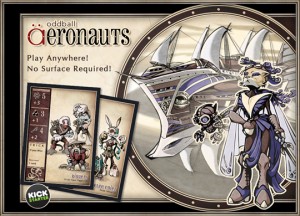 It was one autumn afternoon when I produced the cards and the rules and we settled down to play, around the coffee-table. Funnily enough, both the boys reacted in the same way I did to seeing the cards; the first thing they wanted to do was check out the artwork – and I’m pleased to report that the artwork is superb. It’s a bit hard to categorise; you might say it’s Steampunk, you might detect a drop of Manga in there and you might be tempted to pin a Fantasy badge on it. I think it’s all those things and a little bit more; the Crew, Weapons, monsters and Events are all beautifully realised in crisp, clean illustration that leave you in no doubt as to who’s who. For my two play-testing chums, it sparked some cheerful conversation about back-stories and characters. If there were ever a bunch of cards that have the potential to be given their own comic-strips, then you’ll find them in Oddball Aeronauts.

In fact, I’m quietly hoping that the designers take this as a hint and get their pens out. 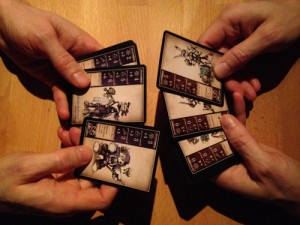 The game itself is fast and easy to play. Without giving too much away, you play the captain and crew of an air-faring vessel and attempt to blow anyone who gets in your way to smithereens. However, just to spice things up, there are Event cards thrown into the mix; cards that can produce an unexpected situation than can affect all the players and scupper even the most tactical plans.

Rounds are nicely ordered, so that you always know whose turn it is to do what. Using Skill Cards, you can opt to do all sorts of swashbuckley things, such as Sail, use or your Guns or Board an enemy vessel and have at the swabs that stand between you and victory. But the features that provided the most air-pumping and cries of ‘Yesss!’ were the Tricks. These are just what you think they are: bonuses that give you the upper-hand, in an underhand fashion. Playing a Trick can be used to augment your Skill Bonus in attacks, defence or, if you’re feeling a bit lily-livered, getting away. For our game, it became a good excuse to backstab anyone who looked like they were doing a bit better than you.

It’s worth remembering that I’m a 43 year-old man, who was playing Oddball Aeronauts with two 10 year-old; we all picked up the rules pretty quickly and, as is the case with the best games, we found that the best way to get familiar with them was to learn by playing.

I think our first game lasted about half an hour and the following two were even faster. Oddball Aeronauts is perfect for off-the-cuff gaming or if you’re looking for a game to get your dander up, without having to roll dice and follow lengthy plots. It’s fast and furious and the closest you’ll get to swashing your buckle without getting arrested! The other eminently-practical thing about this game is that it’s not played on a surface; you all sit round like air-faring gamblers, fanning your cards out, but keeping them close to your chest, meaning you can pretty much play anywhere.

If there’s anything I’d like to see more of, it’s a bit more ‘fluff’. Because the artwork is so superb, I wanted to know a bit more about the characters and the world they inhabit – but that could just be the RPG fan in me. However, if there is the chance for a supporting comic or some extra background material – I’d love to see it.

Oddball Aeronauts is one of those rare games that does exactly what it says on the tin. It’s fun, fast and easy to play, without all those arguments over rules that seem to dominate other games of this sort.

I think it’s fair to say that I’m a fan!

One thought on “Gametesting a Geeky Game”