Bit late in the day, but I’ve managed to scrape together a few precious moments to finally get my thoughts down about the Launch for Geekhood #2.

And, quite frankly, it was The Launch That Almost Never Happened. 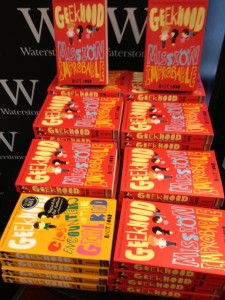 I knew I wanted to do one and, as Mission Impobable started to look more like a book, I turned my thoughts to what I was going to do. The last one, my first one, was such a laugh that I wanted to try and get a similar level of madness together for the next one. But this one was fraught with problems.

Learning from the first launch, I realised that the first thing I needed was a venue. Waterstones in Oxford Street hosted the first and they did such a good job, that it seemed my first logical port of call, so I dropped them a line, quietly confident that they’d have me back. Which I’m sure they would’ve done if the shop hadn’t flooded as a result of the sprinkler system going off and practically drowning the place.

So, that wasn’t a possibility, but I wanted somewhere central to get everyone together, so I tried a couple of other bookshops only to be met with astronomical hire fees. No dice.

A couple of weeks before this phoneathon, I’d wandered into Waterstones on High Street Kensington and had a bit of a laugh with a couple of the staff, so I gave them a bell. As chance would have it, the Events Manager, Michael, was well up for it and liked the idea of fancy dress, which I punted to him. Things got even more serendipitous when it turned out that his girlfriend went to my old Drama School and, at some point, we had crossed paths. It was a done deal.

What next? Ah, yes – cakes. More specifically: cupcakes. Shopping for cupcakes isn’t something I normally do and, after trawling the ‘Net and seeing the price-tags that come with professionally-made cupcakes, I resolved to make my own. Which, I realise now, was a little optimistic; I can cook a bit but, living on a boat, my facilities are a little limited. But, as I was researching recipes (the Banoffee ones looked good), I stumbled across the website of a local lady who makes them as a supplement to her income, so I rang her. Brilliantly, her prices fitted my budget and I ordered 60 superhero-style cupcakes, to be delivered to me on the Monday morning. 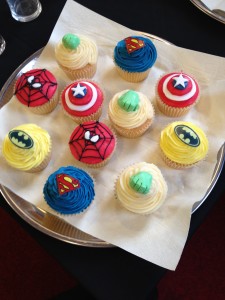 Excellent! Now, we need…something to drink! That was easy; I just went to my local supermarket and picked up some half-decent wine and softies.

Now I was left with the decision about what I was going to wear. I couldn’t really pull out my Hobbit costume again, so I had a think about the book. There were two costumey themes that sprang to mind: superheroes and LARPers. I went for superheroes. I went for Batman. Visions of me looking all muscley and imposing chugged through  my head as I ordered a Batsuit off eBay and all was well with the world. 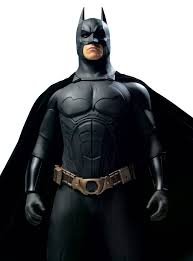 But then I had another idea! Last time, I hired members of the UK Garrison to turn up as Darth Vader and Stormtroopers. After a quick trawl of the web, I found that there was no superhero equivalent, so it looked like it was going to be a Spandex-free event. That is until research took me to some Cosplay sites, where I put out a clarion call and gor responses from three Cosplayers who fancied turning up. Bingo! It was all coming together, a la Hannibal Smith.

Until Monday came along. I hadn’t had the chance to try on my costume, so  did it as soon as I got up, I put it on. Ah. Not quite Christian Bale. Not even Adam West. I looked like a hobbit stuffed into a sack. A very tight fitting one. But there was no turning back; tonight, Matthew, I was going to be Batdwarf.

The cakes arrived and they looked great, so I put them on the back seat of the car while I sent emails to the three Cosplayers, who I hadn’t heard from after their original enthusiasm. I sent them directions, phone numbers and maps – and waited. All three heroes bailed on me. There was no Spiderman swinging by, no Loki causing mischief and no Superman to trade punches with. I guess they were all saving the world that day.

But I had everything else, so I jumped in the car and hit the M4. On the M4, someone almost hit me and I had to slam the anchors on. I didn’t realise, until I got to the other end, that that funny sliding noise was the cupcakes hitting the back of my seat and squodging their buttercream swirls against each other. It was all going wrong.

But the enthusiasm of the Waterstones staff lifted me out of my fug and we recued the cupcakes, sorted the wine, got prizes together for the fancy dress and then I wriggled into my tights. 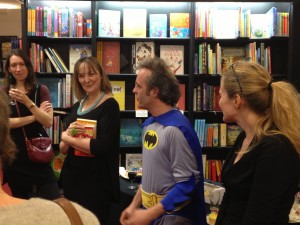 Once again, everyone who turned up did me proud. I’d badgered some real-life LARPers into coming and they did, in full regalia. There were cape-wearing bloggers, comic book characters and my Mum and son surprised me by turning up, when I thought they couldn’t.

There were also other authors: Dave Cousins (whose book, Waiting for Gonzo, I’d just read) and he was a fabulous chap; very easy to chat with. Sara ‘Dark Parties’ Grant was there, too, being all successful and famous and I got an invite to her forthcoming launch. My ageny, Jenny and Jane and the Stripes Gang rocked up and pretty soon, it was all in full swing. There were the usual speeches – although I did chuckle when Jane asked me if I thought it was OK to say the word ‘condom’ in her speech, as there were kids present. I thought it was OK. 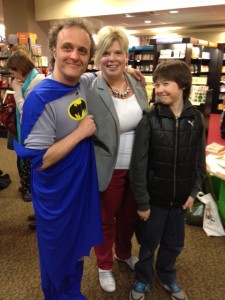 So, I came to realise that, while it can be great fun to have legions of costumed extras, what you really need to make a good Launch Do, is good people.