When I was asked if I would chair a panel event at YALC, my reaction was something along the lines of “Hell, yes!” – but maybe a bit more sweary. It’s always like that with me: the idea is always brilliant. And then the reality of it starts to dawn and the nerves kick in and that big old yellow streak starts to glow. Normally around midnight, keeping me up until I’m too exhausted to be frightened.

But, long before the butterflies started flapping in my tum, long before they were even caterpillars, I decided I wanted to be a Damn Good Chair. I’ve had the fortune to be chaired by three Damn Fine Chairs: Hannah Love, Julia Eccleshare and Jo Nadin. As far as I was concerned, they made it look like a walk in the park, like it was something you just did; like it was was easy. So, I emailed them for advice. Uniformly, they said I had to read the authors’ latest books and really get to grips with their themes.

If you’re ever going to chair an author panel,make sure you do that. I’ve got reams of notes about each book and it helps you sort out what you want to ask. Might seem obvious, but I am notoriously stupid.

Reading the books was interesting; they weren’t all the sort of thing I’d usually read, but I’m really glad I did as it opened my eyes to different thoughts and writing styles.It also helped me nail what they had in common, which also helped to form questions.

Meeting the Two-thirds of the Gang 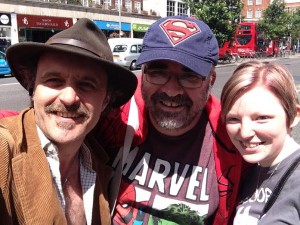 Me, Tim and Lucy

Before the caterpillars even chrysalised, I arranged to meet Lucy Saxon and Tim O’ Rourke one sunny Friday in June. Rainbow Rowell couldn’t be there as she was in the USA.I dare say it might’ve cost more than an Oyster Card to turn up for the afternoon. The three of us met up in Holland Park and sat at a bench, just yapping.I fired out some of my embryonic questions and we just sort of batted them back and forth. Both Tim and Lucy were easy talkers; just fire them a topic and off they went. We covered everything from trains and cosplay to the nature of evil. And squeezed in some coffee.

After that meeting, I went back to my notes and then to the Internet.Not having met Rainbow yet, I found some interviews she’d done on YouTube and tried to get a sense of her. From what I could see, she seemed happy to talk and with some good gags up her sleeve. I also wanted to make sure I wasn’t going to ask any questions that she’d been asked before.

So, over the next few weeks, I revised my questions, trawled the ‘Net and spoke to a few people I trust about what might make good questions for authors. Slowly, to paraphrase Richard Burton in War of the Worlds, I drew my plans against them.

The Problems with having a Massive Ego

In the meantime, there was my outfit to consider. Having been to a few cons in my time, the temptation was to go for something outrageous (I did have my eye on a Stormtrooper outfit). Thankfully, I was able to quieten my Massive Ego enough to realise Something Important: you don’t upstage the bride at a wedding. And I had three. I needed to think like a bridesmaid or a best man; look good, but not spotlight-stealing-good. That’s bad form.

So, I decided to try and pay tribute to as many things as possible without going nuts. I had a green, velvet frock-coat (Paul McGann’s Doctor), a Marvel Comics shirt, a pale fedora (Watchmen’s Rorschach), a Game of Thrones-style necklace and Star Wars boxers (hidden under my jeans, I hasten to add).Plus, I grew a beard and ‘tache in the style of John Hurt to use as an ice-breaker, in case I met him. 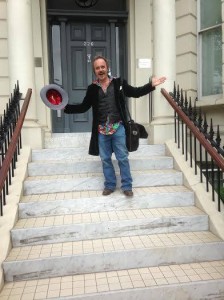 My YALC outfit on some fancy     London steps

I spent a day rehearsing my intro and couldn’t remember a word of it by the time night fell. And sleep? Forget it. My head just kept creating possible goofs I might make and then started coming up with reasons why I might not be able to go. Faking a broken arm was on the list.

But this was the First Ever YALC – and I’d been asked to be part of it! Plus, my Massive Ego wanted to do a Good Job.

The day before the event, the butterflies had a good old tour of my stomach. No amount of tea could drown the bastards; they just kept on flapping. I think it was around 2am, when I suddenly thought: “Hang on- what’s the problem? Your panel is made up of great and talkative people, you’re all prepped-up and you’ve got a moustache. Just do it.”

The next morning, at 7am, me and my moustache drove to Earl’s Court and, amazingly found a parking space. By 10am, I was weaving through the crowds, goggling at the sheer array of costumes and generally soaking up the welcoming, celebratory, joyous feeling of a Mighty Gathering of Geeks.

Part Two of my post about the actual event: Coming Soon……