It all started with this guy: 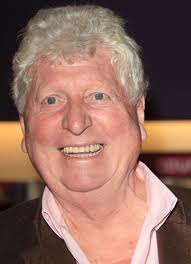 For those of you who don’t know who he is – and SHAME on you – you’re looking at a picture of Tom Baker, the Fourth Doctor and a brilliant Sherlock Holmes. It was Doctor Who that made me want to be an actor and, many years later, when I was one, I saw Tom walking down a street towards me. And I did that thing that most of us do: froze, let him walk by and then kick yourself for a good few hours after.

That was the turning point. I resolved that if I ever encountered somebody I respect or admire, I’d at least say hallo. It’s a bit different from working with your heroes; I met this guy in 1998:

But my resolution led me to meet other heroes, like this: 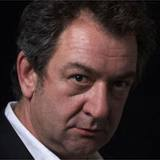 And I got to meet one this year. And  go round to his house for a cup of tea. They say ‘don’t meet your heroes.’ I disagree. Every time I meet someone I admire, it’s like I get to travel back in time to meet my younger self and whisper in my year that in X Amount of Years, I’ll be hanging out with That Person. This recent addition to my time-travelling hero-worship meant that I got to travel back to myself in 2003 and say “in 9 years time, you’ll be drinking tea with this guy and even refusing a Digestive.” 33 year-old me would be blown away because on that particular day in 1993, I am picking up a book that will leave a lasting impression on me and make me hunt down pretty much everything else he ever writes. Because in 9 years time, this will happen: 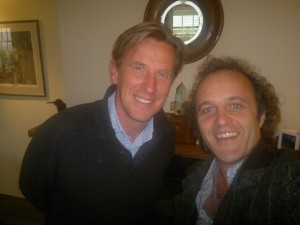 I will meet Philip Reeve. And when I tell my 33 year-old self what’s going to happen, he’s not going to believe it. But I’ll have to make him promise to behave himself on that day; no showing me up.

I’m pleased to report that all the people I’ve respected and had the chance to meet have all been lovely – and I even count a couple of them as friends. Meet your heroes. They might not be what you expect, but you can tell your past self that you’re actually going to do it, which’ll give you something to look forward to – even if you don’t know it.